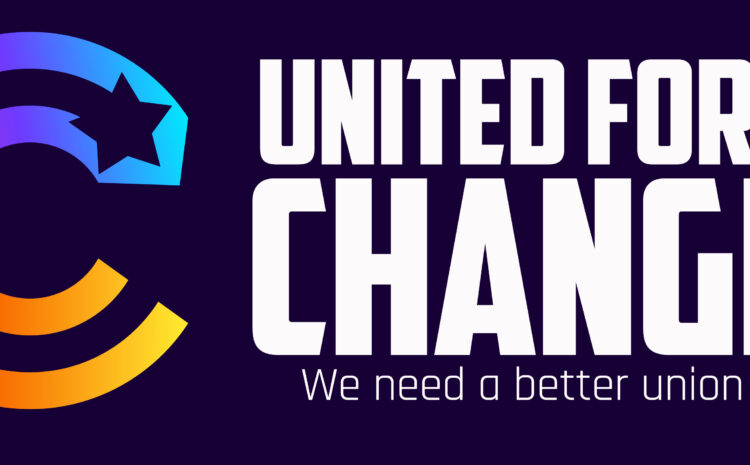 This spring United For Change (UFC) is running in the citywide UFT elections. UFC is running 400+ educators as candidates for convention delegates to the statewide NYSUT conventions and nationwide AFT and NEA conventions. UFC consists of members from several UFT-represented rank-and-file educator groups: Movement of Rank and File Educators [MORE-UFT] Caucus, Solidarity Caucus, New Action Caucus, Retiree Advocate, OTs and PTs For A Fair Contract, the Independent Coalition of Educators [ICE-UFT], and Educators of NYC.

Our local UFT election will have an effect on national debates over education and labor tactics. New York City makes up such a large share of New York State, that if UFC wins the UFT elections, we effectively win NYSUT and can tackle these important issues at the state level. The UFT’s delegates also make up a significant plurality of AFT delegates. Therefore, winning the UFT election makes it possible for our union to be authentically progressive at the national level.

The Unity Caucus, led by UFT President Michael Mulgrew, is the foundation for the so-called “Progressive” Caucus of the national AFT, which is led by former UFT/Unity leader and current AFT president Randi Weingarten. UFT representatives form a large plurality of the representatives at the NYSUT and AFT conventions. If United For Change wins the election and removes Mulgrew from power, there would likely be a transformation in the approach and ideology of the state and national unions towards real grassroots democratic unionism and authentically progressive politics. Weingarten and Mulgrew call their national caucus “progressive,” but it is hardly an accurate term. For example, just see this video of Mulgrew and Barr arguing at the national convention in support of the Common Core.
NYSUT and AFT conventions work similarly to UFT Delegate Assemblies, just at higher levels: state and national union, education, and political questions, all of which have a major effect on schooling in NYC. Because conventions are not in NYC, delegates and representatives also get travel/lodging expenses to attend them (and a biannual conference about pedagogy). When in-person, delegates and representatives at these conventions get to meet teachers from very different places and with very different levels of union activity, which can be enlightening. That should be a selling point, but unfortunately, the UFT/Unity leadership of Mulgrew merely uses the conventions to promote the positions of the corporate wing of the Democrat Party held by Randi Weingarten and establishment politicians.

Nick Bacon, one of seven UFC candidates for the UFT High School Executive Board, was elected as a convention delegate in 2019 before he joined UFC. He says the following regarding the conventions:

“With the ‘Progressive Caucus’ in power, these events are much more scripted than even the UFT Delegate Assembly. At the AFT convention, in particular, a disproportionate number of speakers are UFT staffers (or staffers from another union). Most were literally reading papers in front of them. We were also sent out documents from the ‘Progressive Caucus’ that tell you how to vote. Last year, votes were closer than usual since no one was able to monitor us remotely (and so people, like me, voted our conscience without fear of retribution), but I’ve heard that when in person, these meetings are so monitored by UFT District Representatives that everyone votes the party line. Some cities (LA, Chicago, Baltimore…) do have ‘opposition’ representation, so there’s a bit more diversity in the meetings, but it’s still a minority. In particular, because university professors and graduate students are AFT members, you see a lot of graduate teaching fellows putting forth progressive ideas. But again, with the ‘Progressive Caucus’ in power, convention delegates are expected to systematically shoot down good resolutions.”

If UFC wins, we won’t shoot down progressive resolutions – we’ll write them. Therefore, we’ll be able to do more to push progressive educational policy statewide and nationwide. Remember that many educational questions are decided at the state level – such as our pension tiers, tenure, and standardized testing. We can put an end to ‘symbolic’ resolutions there and start pushing resolutions that actually affect educators and students in positive ways. We can form national coalitions with progressive politicians who understand we can’t just try to improve school conditions and benefits for teachers – we need to improve and transform schools as a whole and society as a whole.

UFC’s platform speaks to this in many ways.

If UFC were to win the entire election this spring, it would have implications beyond just a changing of the guard in the UFT officers. It would allow a national movement to flourish that endorses progressive candidates, fights for progressive positions organizes members for democratic input on convention decisions and prepares national actions that increase pressure for education investment and labor respect. The fight starts here in our schools and communities. Vote UFC in the Spring 2022 UFT elections.