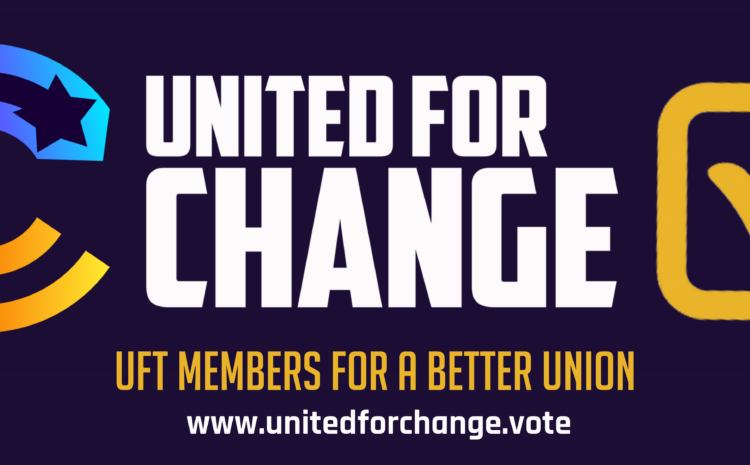 TO DEBATE AND IMPROVE UNION DEMOCRACY DURING THE SPRING 2022 ELECTION

TO DEBATE AND IMPROVE UNION DEMOCRACY DURING THE SPRING 2022 ELECTION

On March 1, 2022, Camille Eterno, a veteran union chapter leader and teacher running for president of the United Federation of Teachers with the United For Change opposition slate, wrote a letter inviting UFT President Michael Mulgrew to a live-streamed debate to be made available to every UFT member. Her goal is to engage the over 76% of UFT members who did not vote in the last UFT election. With turnout abysmally low, now is the time to get union members active in the NYC teachers’ union. Mr. Mulgrew did not respond. At the February 2022 Delegate Assembly, Ms. Eterno attempted to ask a question about the long filibuster-like presidential report of Mr. Mulgrew. He and his collaborators shouted her down, and afterward, the leadership’s employees and caucus members insulted her on social media.

United for Change, a group of opposition caucuses, activist groups, and individual educators in the UFT has announced a joint-slate coalition to challenge the 60-year reign of the UFT’s Unity caucus in the upcoming 2022 UFT elections. This has major state and national implications as well, as the UFT  controls the national (AFT) and state (NYSUT) union conventions with its large convention delegations. UFC wants to see a fundamental shift at the top of our union after entrenched, increasingly undemocratic, and unaccountable, single-party control. Our coalition’s platform includes calls for fair pay, a stronger contract, and a more proactive and grassroots approach to fights over issues like health care, school safety, and the class sizes and caseloads that UFT members encounter. The UFT leadership’s failure to consult members and to deliver safe conditions during COVID-19 was a recent and prominent example of its ineffective approach.

The largest education labor union is routinely, systemically, and regularly violating federal labor law with blatant disregard. We have concern and evidence that the UFT leadership is using its current union offices to solidify its frontrunner status. Ms. Eterno and the United for Change slate want to open up UFT democracy and work for better schools for NYC’s educators and students. Unfortunately, from undemocratic delegate assemblies to illegal electioneering to a refusal to a presidential candidate debate, the UFT leadership of Michael Mulgrew is not sending hopeful signs.

Camille Eterno will be present at the UFT Delegate Assembly at 52 Broadway, New York, NY on March 23, 2022, from 4 pm to 6 pm. There will also be a demonstration for fair pay and respect led by the OT/PTs for a Fair Contract group, one of many groups that form United for Change.