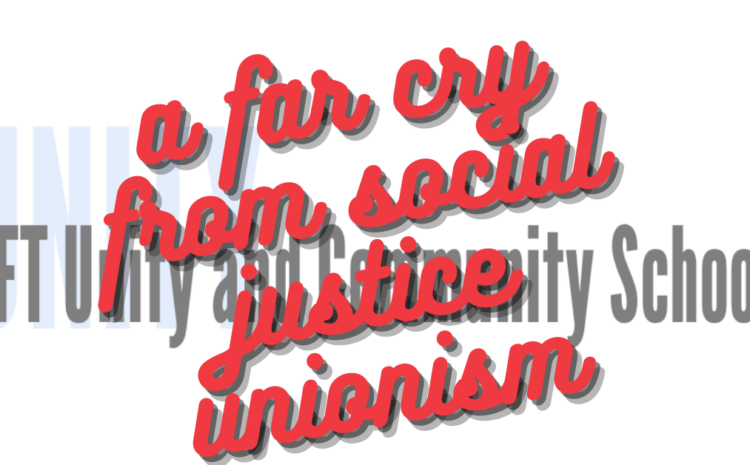 “Unity” caucus claims victory with the community schools. We know how far this is from the truth. This is merely one example of a union leadership selling out both its rank and file members and the community.

While “unity,” which runs a closed-door union negotiating table, doesn’t demand smaller classes or demand caps on guidance and social worker caseloads, United for Change member organizations sit at the table with the community allies who organized Black Lives Matter Week of Action in schools for years. Four years later, the “unity”-led UFT jumped on that wagon…sort of; they created one (1) Instagram post and eventually had to disable the comments which they neglected to moderate, much like they neglected to add the post to their Facebook or Twitter pages.

The organizations affiliated with the United for Change coalition are asking for smaller classes and caps on caseloads. Though United for Change is denied a seat at the negotiating table, we sit at the table with the community by including this in our platform.

“Unity,” on the other hand, floods schools in low-income neighborhoods with low paying non-union jobs that keep those communities impoverished. Unity seems to have taken that one step further by opening up a 501c3 that offers consulting services, is currently seeking employees, and refusing to offer them pensions. “Unity” has the audacity to call pensionless jobs with relatively low wages a “victory.” They throw crumbs to the community instead of fighting for union wages and benefits for these workers as well.

Unity’s actions are just one example of union leadership selling out both its rank and file members and the community.

It makes us wonder if maybe the UFT doesn’t want to negotiate guidance counselor caps and social worker caps because this would cut into their consulting services non-profit hustle. It seems like quite the conflict of interest.

Furthermore, “unity” goes on to claim the community schools model as an example of social justice unionism. Social justice unionism is about asking for union jobs for the community, so that the community is no longer dependent on precarious and exploitative non-union jobs the likes of REI and the many not-yet-unionized Amazon and Starbucks locations. Instead of securing robust wages for other workers, what “unity” does through the UCS initiative is to perpetuate the cycle of low wages, unstable working conditions and dependency by creating more underpaying jobs while refusing to negotiate for working conditions that would substantially improve student learning conditions.